August 26, 2020 — Cheyenne, Wyoming — This year, Wyoming continues to commemorate 150 years of women’s suffrage and firsts for women in the nation. As the United States honors the 100th anniversary of the 19th Amendment, which guaranteed women the right to vote, Wyoming will mark the 150th anniversary of the first woman to vote on Sept. 6, 2020. On the morning of Sept. 6, 1870, in Laramie, Wyo., Louisa Swain made history by becoming the first woman to cast an electoral ballot under laws giving women full civil and political equality with men.

In 2019, Wyoming celebrated the 150th anniversary of women’s suffrage – 50 years before the 19th Amendment – and the Wyoming Office of Tourism marked the milestone by declaring it the “Year of Wyoming Women” with special exhibits and events throughout the state. On Dec. 10, 1869, the Wyoming territory became the first in the nation to guarantee women the unconditional suffrage including the right to vote, hold public office and serve on a jury.

“As we celebrate Women’s Equality Day today, it’s important to recognize the trailblazing women, like Louisa Swain, who paved the way for so many women and for future generations,” said Diane Shober, executive director of Wyoming Office of Tourism. “The West played a pivotal role in the passing of the 19th Amendment and the pioneering spirit of Wyoming’s women continues to live on today.”

To commemorate the milestone anniversary, Wyoming Office of Tourism partnered with The Louisa Swain Foundation and the American Trucking Association (ATA) for a virtual women’s suffrage road tour from Washington D.C. to Laramie, Wyo. starting on August 31.

“We will utilize the unique convergence of the anniversaries of Louisa’s historic vote and the ratification of the 19th amendment to highlight the role women play in our society and to celebrate Wyoming’s ongoing legacy as the Equality State,” said Brandon Kirkham, board chair for The Louisa Swain Foundation. “We are proud to have such a wonderful partnership with the Wyoming Office of Tourism and the American Trucking Association to bring this commemorative moment to a national scale.”

An ATA semitruck and trailer – fully wrapped to honor Wyoming’s Louisa Swain – will make its way across the nation via I-70, with a special stop at the Wyoming State Capitol in Cheyenne, Wyo. on Sept 4 at 10 a.m. Wyoming’s First Lady Jennie Gordon will welcome the semitruck from the front steps of the State Capitol and offer a few opening remarks before it makes its final stop in Laramie Wyo. on Sept. 5.

Following the arrival of the semitruck and trailer in Laramie, a ceremony recognizing Louisa Swain’s historic vote will take place at the Wyoming Women’s History House on Sept. 6 at 1 p.m. 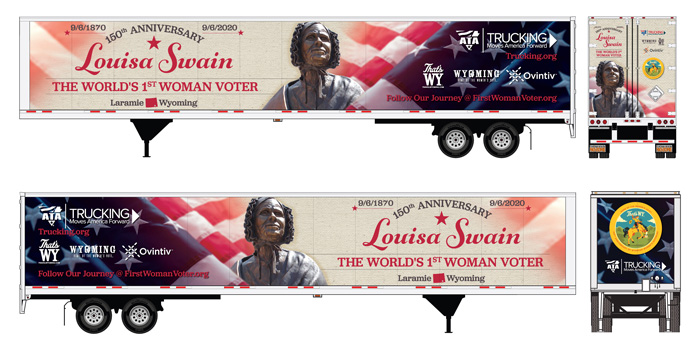 To follow the virtual road tour from Washington D.C. to Wyoming and for more information on the 150th anniversary of the first women’s vote, visit firstwomanvoter.org and TravelWyoming.com.

To celebrate Wyoming’s pioneering women and the strong women of today, Wyoming Office of Tourism encourages visitors and locals to join the conversation by sharing stories of female empowerment by using #ThatsWYWomen and tagging @VisitWyoming on Sept. 6, 2020.

Twenty years after the 1869 law passed, Wyoming sought statehood and it famously refused to enter the Union if women’s suffrage was not upheld. And in 1890, Wyoming officially entered the Union as the 44th state and the first state to guarantee women these rights.

For more information about Wyoming’s 150th anniversary of Women’s Suffrage and Wyoming Office of Tourism, visit the award-winning site, TravelWyoming.com.